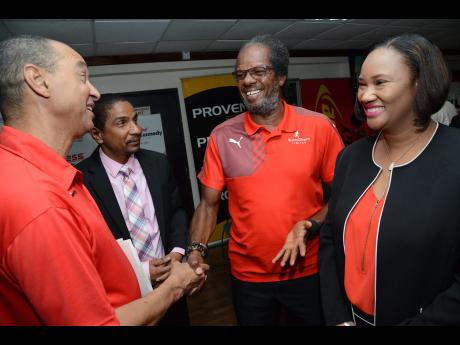 Chief Executive Officer (CEO) of GraceKennedy Don Wehby said that the company is looking to use its GK Education 5K Run/Walk to aid its plan to send 10,000 children to school in the next few years.

The Run/Walk, which is also officially sponsored by The Gleaner Company (Media) Ltd, gets under way at 6 a.m. on Sunday July 9 in downtown Kingston. Wehby said this year’s target is primarily to raise more funds.

“We have set an aggressive target of $9.5 million to continue to assist children with their education,” Wehby said, during the media launch at GraceKennedy offices located at Harbour Street yesterday. “GraceKennedy is committed to education. We currently send 5,000 students to school, so I want by 2020 to send 10,000 students to school,” he added.

“Every Jamaican should get the opportunity to be educated and that is what GraceKennedy stands for – helping to improve Jamaica. These events are my favourite,” the CEO said.

Francis added that the event that started 38 years ago, is the primary fundraiser for the educational programmes undertaken by the Grace and Staff Community Development Foundation.

The activities will not be exclusive only to the roadways, as it was also announced that there will be a boat race. The entry fee for the 5K is $1,200 and awards will be presented immediately after the race.