All is set for tomorrow’s official start of the highly anticipated 2017 Digicel Grand Prix Athletics Championship, which gets out of the blocks with the Western Championship at the Montego Bay Sports Complex.

The five-meet Digicel series has a prize package totalling $15 million in scholarships and prizes for top athletes and their schools. Stephen Smith, head of the County of Cornwall Athletics Association (COCAA), which is hosting the track and field event, says they are ready.

“We’re actually 95 per cent finished. We’re on the ball for the start of the series. We’re only watching the rain at the eliminations and hope for the best weather at the finals,” said Smith.

Qualifiers for the first meet in the 2017 Digicel Grand Prix ended yesterday with the girls’ eliminations at St Elizabeth Technical High School. Now all eyes will be on the much-sought-after finals, to be held in Montego Bay.

Tomorrow, patrons will not only be seeing great performances on the track. They will also be entertained by dancehall stars Tanto Blacks, Chi Ching Ching and the Montego Bay Boys and Girls Club Marching Band.

For their efforts, the top male and female overall winners of the Western Champs will collect $250,000 each while the second and third-place winners will get $100,000 and $50,000, respectively.

“This is the type of investment that can lead to academic and athletic greatness, which is the balance that these young talents needs. We look forward to further contributing to the development of athletics right across Jamaica. Our mission is to support young athletes to make them grow from ‘grass roots to greatness’,” said Kamal Powell, senior sponsorship and development manager at Digicel.

“COCAA is an association that is geared towards development, and with the help of Digicel, we have been able to cater to athletes coming up from the primary level and those in high school looking to make it to the next level. We feel good to know that Digicel is helping our development.” 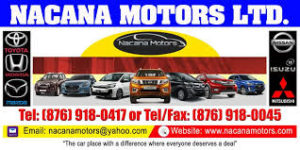