It’s Getting Harder to Talk About God 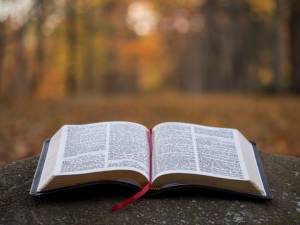 The decline in our spiritual vocabulary has many real-world consequences.

By Jonathan Merritt
Mr. Merritt writes about the intersection of religion, culture and politics.

More than 70 percent of Americans identify as Christian, but you wouldn’t know it from listening to them. An overwhelming majority of people say that they don’t feel comfortable speaking about faith, most of the time.

During the Great Depression, the playwright Thornton Wilder remarked, “The revival in religion will be a rhetorical problem — new persuasive words for defaced or degraded ones.” Wilder knew that during times of rapid social change, God-talk is often difficult to muster.

We may have traded 1930s-level poverty and hunger for a resurgence in racism, sexism and environmental cataclysm, but our problems are no less serious — or spiritually disorienting. While many of our most visible leaders claim to be religious, their moral frameworks seem unrecognizable to masses of other believers. How do we speak about God in times like these when God is hard to spot?

As a student of American Christianity and the son of a prominent megachurch pastor, I’ve been sensing for some time that sacred speech and spiritual conversation are in decline. But this was only a hunch I had formed in response to anecdotal evidence and personal experience. I lacked the quantitative data needed to say for sure.

So last year, I enlisted the Barna Group, a social research firm focused on religion and public life, to conduct a survey of 1,000 American adults. This study revealed that most Americans — more than three-quarters, actually — do not often have spiritual or religious conversations.

But here’s the real shocker: Practicing Christians who attend church regularly aren’t faring much better. A mere 13 percent had a spiritual conversation around once a week.

For those who practice Christianity, such trends are confounding. It is a religion that has always produced progeny through the combination of spiritual speech and good deeds. Nearly every New Testament author speaks about the power of spiritual speech, and Jesus final command to his disciples was to go into the world and spread his teachings. You cannot be a Christian in a vacuum.

And yet even someone like me who has spent his entire life using God-talk knows how hard it has become. Five years ago, I moved from the Bible Belt to New York City and ran headfirst into an unexpected language barrier. Sure, I could still speak English as well as I always had. But I could no longer “speak God.”

By this I mean that spiritual conversations, once a natural part of each day for me, suddenly became a struggle. Whether I spoke to a stranger or a friend, the exchange flowed freely so long as I stuck to small talk. But conversations stalled out the moment the subject turned spiritual.

Before relocating, I worked as a part-time minister at a suburban congregation outside of Atlanta. Before that, I had attended a Christian college and seminary. All my life, I used religious language daily in my home and community, rarely pausing to think about the meaning of my words. But I was not in Georgia anymore.

Whenever I used religious terms I considered common — like “gospel” and “saved” — my conversation partner often stopped me mid-thought to ask for a definition, please. I’d try to rephrase those words in ordinary vernacular, but I couldn’t seem to articulate their meanings. Some words, like “sin,” now felt so negative that they lodged in my throat. Others, like “grace,” I’d spoken so often that I no longer knew what they meant.

In New York — as in much of America, increasingly — religious fluency is not assumed. Work often takes precedence over worship, social lives are prioritized over spiritual disciplines and most people save their Sunday-best clothing for Monday through Friday. In pluralistic contexts, our neighbors don’t read from the same script or draw from a common spiritual vocabulary.

According to my survey, a range of internal conflicts is driving Americans from God-talk. Some said these types of conversations create tension or arguments (28 percent); others feel put off by how religion has been politicized (17 percent); others still report not wanting to appear religious (7 percent), sound weird (6 percent) or seem extremist (5 percent). Whatever the reason, for most of us in this majority-Christian nation, our conversations almost never address the spirituality we claim is important.

A deeper look reveals that the decline in sacred speech is not a recent trend, though we are only now becoming fully aware of it. By searching the Google Ngram corpus — a collection of millions of books, newspapers, webpages and speeches published between 1500 and 2008 — we can now determine the frequency of word usage over the centuries. This data shows that most religious and spiritual words have been declining in the English-speaking world since the early 20th century.

One might expect a meaty theological term like “salvation” to fade, but basic moral and religious words are also falling out of use. A study in The Journal of Positive Psychology analyzed 50 terms associated with moral virtue. Language about the virtues Christians call the fruit of the spirit — words like “love,” “patience,” “gentleness” and “faithfulness” — has become much rarer. Humility words, like “modesty,” fell by 52 percent. Compassion words, like “kindness,” dropped by 56 percent. Gratitude words, like “thankfulness,” declined by 49 percent.

A decline in religious language and a decrease in spiritual conversations does not necessarily mean that we are in crisis, of course. But when you combine the data about the decline in religious rhetoric with an emerging body of research that reveals how much our linguistic landscape both reflects and affects our views, it provides ample cause for alarm.

There is also a practical reason we need a revival in God-talk, specifically at this time in American history. Many people now avoid religious and spiritual language because they don’t like the way it has been used, misused and abused by others. But when people stop speaking God because they don’t like what these words have come to mean and the way they’ve been used, those who are causing the problem get to hog the microphone.

Christians in 21st-century America now face our own serious “rhetorical problem.” We must work together to revive sacred speech and rekindle confidence in the vocabulary of faith. If we cannot rise to this occasion, sacred speech will continue its rapid decline — and the worst among us will continue to define what the word “Christian” means.

Jonathan Merritt (@JonathanMerritt) is a contributing writer for The Atlantic and the author, most recently, of “Learning to Speak God From Scratch: Why Sacred Words Are Vanishing — And How We Can Revive Them.”